In order to create visual impact, Hershey’s chose to combine their American product with a truly British icon, utilising taxi advertising in their ‘Reese’s Perfect’ campaign. Placing their striking creative on 10 liveries, the taxis lit up the bustling streets of London for a 9 month campaign.

To further facilitate talk about their campaign, Hershey’s drew willing passengers aboard with a free chocolate peanut butter give-away. Each driver was given a range of branded confectionary from the original peanut butter cup to the aptly named ‘nutrageous’ bar, to hand out to their customers.

The freebies were an unexpected surprise and gratefully received, giving a positive twist to people’s journeys. The PR element not only helped raise awareness of the brand in the UK, but also encouraged people to share their experience on social networking sites. 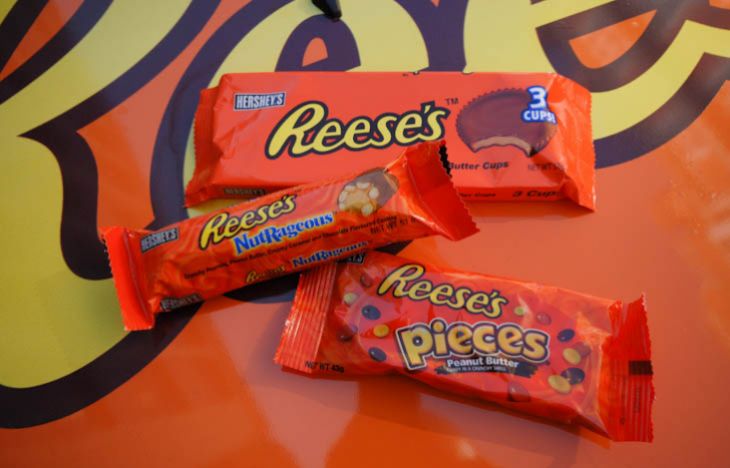 The "Cabmageddon" competition gave shoppers and party goers free rides home on the busiest night of the year! The free rides were also promoted in the press which meant everyone was looking to get a free ride. A Facebook competition also gave lucky winners the chance to get a free ride by dropping a pin on a map to show where they lived and why they were the most deserving of a free ride! To add extra goodwill and Christmas sparkle, a special build taxi had red antlers added to the roof. 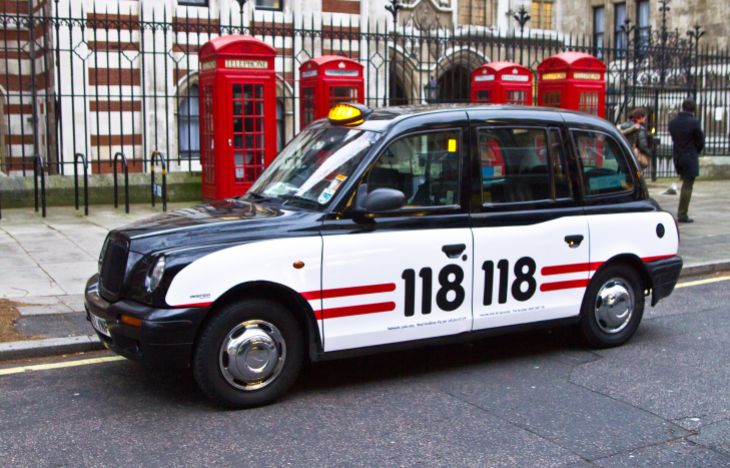 Ubiquitous taxis played a key role in providing impetus for one of the most talked about PR campaigns of December 2011. With a focus on their new Brompton Road store opening, Tommy Hilfiger used 9 uniquely decorated Liveries solely for PR activity and promotion.

Starting with the creative, Tommy Hilfiger not only branded the taxis with their famous preppy style, they also added a festive flare in the form of illuminated bows. The bows, which were secured to the roof, meant the taxis gave the appearance of Christmas presents, turning the heads of intrigued passers-by.

The unique taxis were primarily used at the star-studded store opening, where a host of VIPs could share the taxi experience. Showcasing outside the stylish event and chauffeuring key guests to the exclusive Marks Club after party, the branded cabs were able to create optimum brand exposure.

Surrounding the main event, Tommy Hilfiger also chose to run a series of drive-bys in order to maintain hype. The taxis drove in convoy at key central locations, drawing the attention of Christmas shoppers to the new store. To further facilitate this, models were used to present a preppy girl and boy give-away from the back of the cabs. Giveaways and opportunities for a free ride home provided a successful addition to the whole Tommy Hilfiger experience. 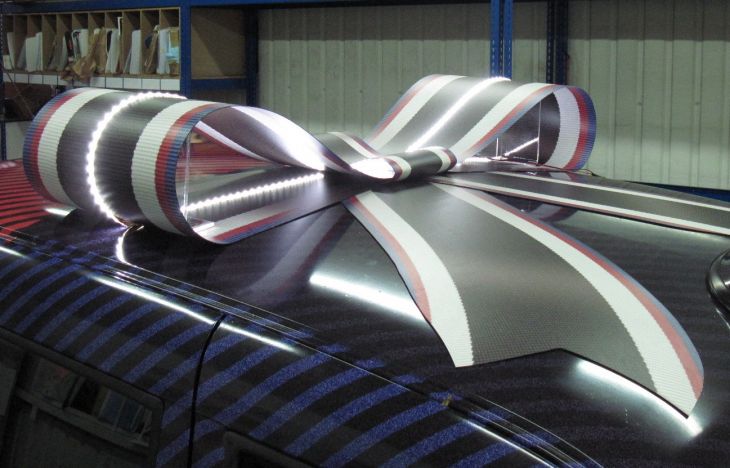 Five of our very best Ambassador drivers were on hand at the IP Expo event, where Violin was exhibiting. The taxis showcased and circled the vicinity of Earls Court to create maximum brand exposure. A press shoot also took place to capture the superside design created especially for the brand. Finally the brand message was driven home by the drivers’ wearing Violin t-shirts. 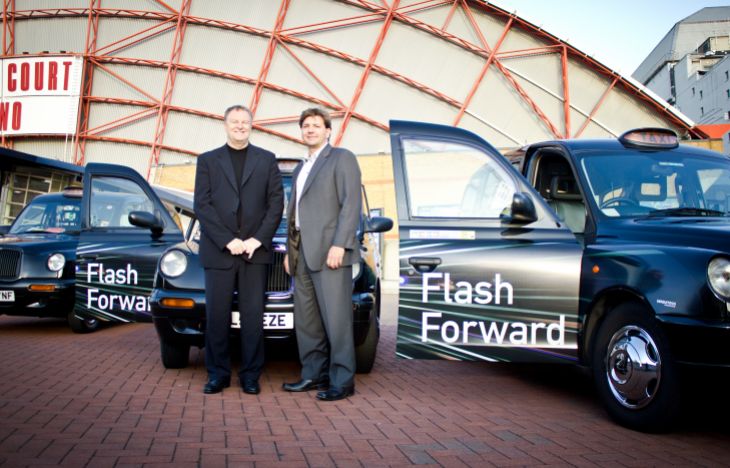 Courvoisier took their signature ‘punch’ on tour around Edinburgh during the Fringe Festival with the help of our brightly branded taxis. The taxis were on hand to transport key clients and journalists to the most exclusive events during August. To share the Courvoisier love, our Ambassador drivers were given hand-outs to distribute to passengers, including the recipe for the famous punch and the history behind the brand. To gain maximum exposure Courvoisier held events at the most fashionable bars and stores in Edinburgh, which our taxis were used to transport client’s home after a punch or two! 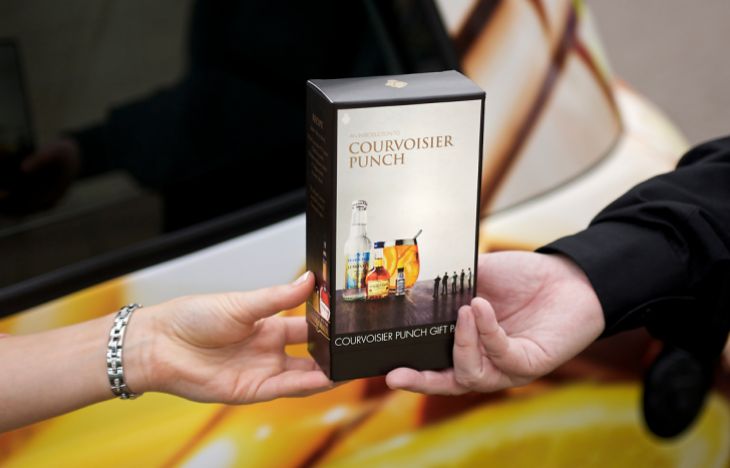 The streets of London came alive on Wednesday 8th June when Kim Kardashian made her first UK appearance at Debenhams on Oxford Circus to promote her new perfume “Kim Kardashian”. On hand was our very own Kim Kardashian branded taxi which spent the day showcasing outside Debenhams as well as chauffeuring her PR team around London. Our Ambassador driver Perry Julian said he had never had “so many photos taken of his taxi before!” 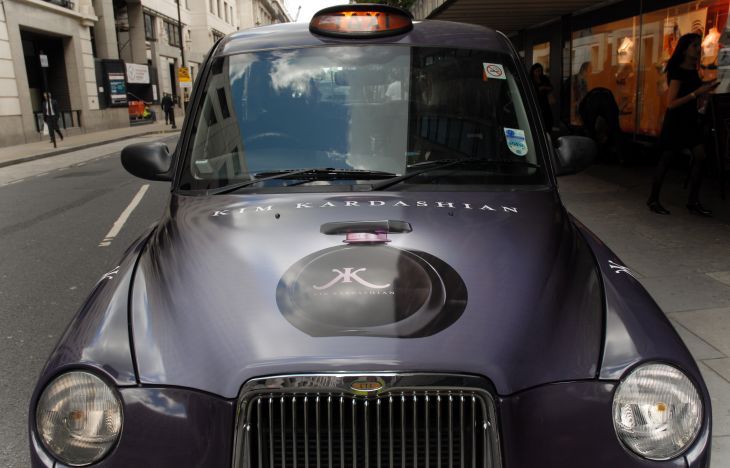 As part of Vodafone’s commitment to provide the best service in London, hundreds of branded taxis get mobile phone chargers, helping Londoners stay in touch and, Vodafone customers can even pay for their ride with their phone, at no extra charge.

Vodafone is aiming to keep Londoners connected with a new fleet of Ubiquitous branded taxis which for the first time will allow all passengers to recharge their phones on the move. Vodafone customers will also be able to pay for their journeys with their phones – at no extra charge – making those last minute stop-offs at the cash point a thing of the past.

From May 3rd, the first of hundreds of Vodafone-branded taxi cabs will take to the streets in one of the biggest ‘wrapping’ advertising campaigns ever seen in the capital. Their bold and colourful Union Jack design, made up of over 2000 London street names, will make an eye-catching addition to the city, as well as easy to spot for anyone who needs to charge up their phone. They will be followed next week by the first of a fleet of Vodafone-branded Heathrow Express trains.

It is all part of Vodafone’s commitment to keeping London calling.

Vodafone UK Chief Executive Guy Laurence said “We are committed to offering London the best possible network. We have already made hundreds of improvements to increase coverage, capacity and reliability and now with our fantastic fleet of Union Jack cabs and their on-board chargers which anyone can use, all Londoners will be able to see our continuing commitment to the capital.” 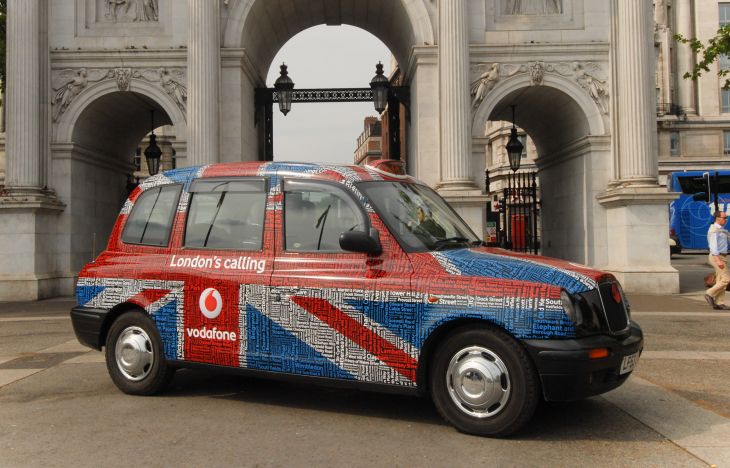 Barbie and Ken return in a Ubiquitous taxi. The most glamorous couple (ever) are back together and they are just in time for everything equally glam at the London Fashion Week. To celebrate, Ubiquitous have five Barbie and Ken branded liveries, complete with Tip Seats, Rear Windows and branded Receipts currently on the London roads. You won’t miss them as they are resplendent in bright pinks and blues! It’s hard to believe Ken was first introduced in 1961 and he looks amazing for someone in his 50s. As Barbie is a lady it is rude to tell you her age. The pair are in very good hands. The taxis are being driven by Ubiquitous ambassador drivers who are involved in five days of PR during the London Fashion Week. Their role is a mixture of transporting fashion journalists and providing free rides to members of the public attending the shows, to celebrate and ‘share the love’ of Barbie and Ken’s reunion. 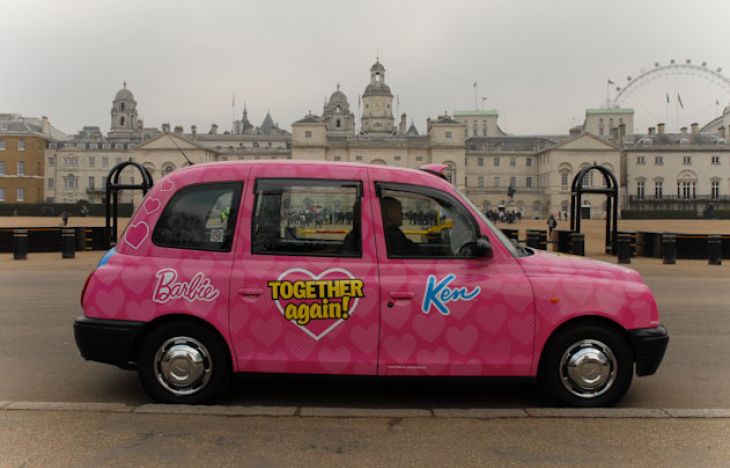 The Sun Newspaper hosted its 3rd year of the Millie Awards at the Imperial War Museum on Wednesday 15th December 2010. A host of celebrities attended to show their gratitude to our heroic soldiers including David Beckham. The Royal Family also played a special part in the evening with Prince Harry and William presenting an award together. Our very own BAE branded taxis were at the event showcasing outside the museum offering a shuttle service to Waterloo Station and then dropped some of England’s most well known celebrity’s home all for free! Michael Tennyson (Communications Manager) was more than overjoyed at the success of the taxis and how they contributed to the evening, “Brilliant. Great Job. I heard very positive feedback.” Well done to all the courageous soldiers from all us here at Ubiquitous. 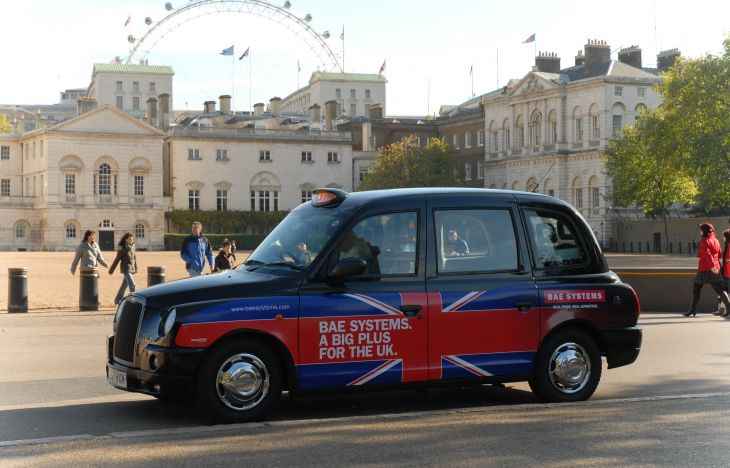 The One Show Challenge for BBC Children In Need got off to a wonderful start on the 27 October with our very own Pudsey taxi ferrying presenters to their challenges. This challenge will take place over the next four weeks and we will see the presenters including Jason Manford, Alex Jones and Chris Evans undertake some of the most gruelling and demanding challenges all in aid of raising money for this fantastic cause. 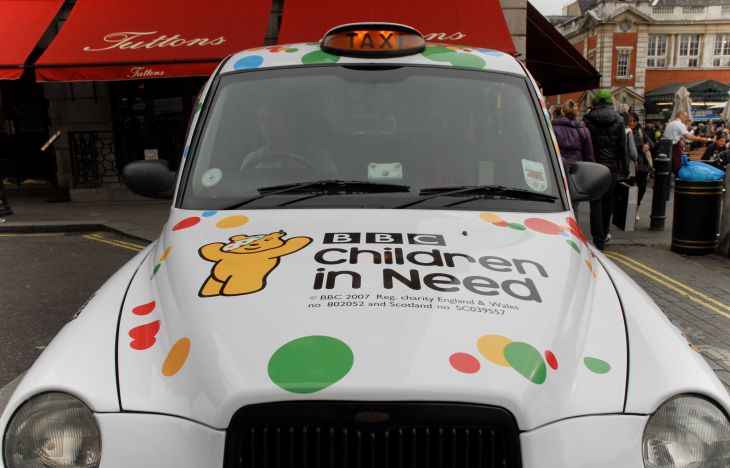