Vikings take to the streets of Edinburgh on taxis

A major new exhibition at the National Museum of Scotland that displays a host of treasures from the home of the people we know as Vikings, is being promoted to the people of Edinburgh through a series of Viking branded taxis, brought to life by taxi advertising specialists Ubiquitous. The creative cabs are part of a multi-channel campaign that includes press, social media and outdoor to promote the exhibition. The National Museum of Scotland is the only UK venue for Vikings!, an outstanding exhibition of more than 500 objects, including jewelry, weapon fragments, carvings, precious metals and household items, from the world-renowned collections of the Swedish History Museum in Stockholm. The taxi campaign features an enlarged image of one of the artifacts from the exhibition, a silver pendant found in a Swedish Viking burial site, in the form of a man’s head. This striking image captures the eye and gives Edinburgh’s general public a taste of the fascinating objects that will be on display as part of this world class exhibition. Commenting on the campaign, Kerry Fraser, Marketing Officer at National Museums Scotland said, ‘The marketing and communications activity for the Vikings! exhibition is aimed at raising awareness and generating visits, whilst creating good visibility and a strong presence and share of voice. The exhibition aims to attract a broad audience of adults and families, from regular arts and culture attendees to new fans of the Vikings. Incorporating taxi advertising as part of the campaign enables us to ensure that our message is reinforced in areas where other media is running, as well as infiltrating those streets where our activity is otherwise light.” The full campaign includes print advertising in Scottish, national, popular and family titles, online advertising, social network activity and bus sides and taxis in Edinburgh. This busy schedule is complemented by leafleting and posters in key tourist locations. ‘It’s fantastic to see taxi advertising being used as part of a comprehensive integrated campaign’ commented Andrew Barnett, Managing Director of Ubiquitous, ‘Taxis are very effective as the “backbone” of a marketing strategy, making sure that all other media is continually reinforced through excellent city-wide coverage. In such a cultural city as Edinburgh, taxis will also deliver frequency of exposure of the ‘Vikings!’ message to a captive audience.’ 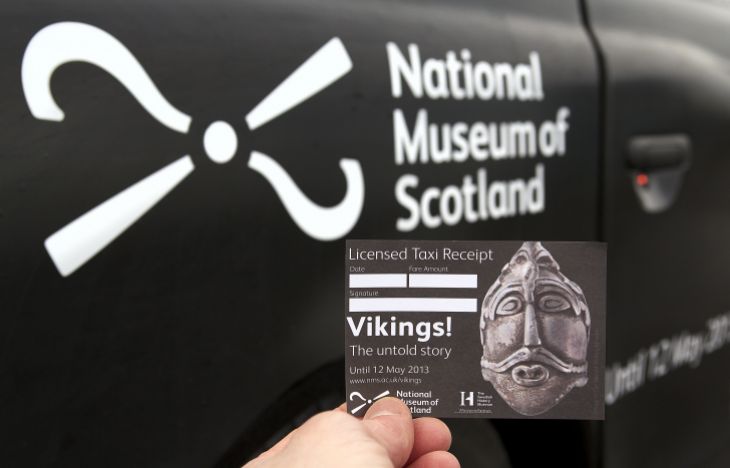