In July, 50 branded taxis took to the streets of Manchester to capture attention of North West holiday makers.

Travelex, the leading foreign exchange specialist, announced it is working with Ubiquitous to raise awareness of its online and airport-based currency exchange services among people in Manchester, who are planning a summer getaway. The campaign, which was booked through Carat Manchester and Posterscope, was designed to reach Manchester’s holiday-makers as they prepare for trips abroad this summer.

The exteriors of 50 taxis were creatively branded to promote Travelex’s online pre-order and collect offering, as well as the company’s prepaid currency cards. Inside, a tip-seat campaign reinforced the message and branded receipts also enabled the Travelex name to remain with passengers long after they have reached their destination. As part of a wider campaign that includes print advertising in regional newspapers, online advertising and radio spots, the taxis helped Travelex to reach consumers right across Manchester, especially in the busy city centre and at key areas such as Manchester Airport and bus and train stations.

Elvin Eldić, Head of UK Retail at Travelex, said: “With many Brits preparing to travel abroad over the summer period, this time of year is crucial for a business like ours. We wanted to launch a campaign that would provide travellers with a range of currency exchange options in order to ease some of the stress associated with planning a holiday. Alongside our advertising efforts in print and on the radio, the taxis will broadcast our key message that where our services are available online and at the airport, changing money becomes a more convenient task.” 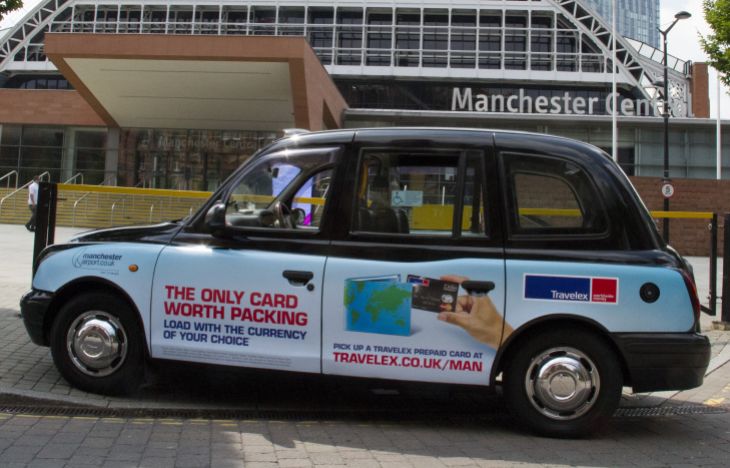