Well-known for their affinity for collaboration, Tommy Hilfiger teamed with Top Model Gigi Hadid in September 2016 for a nautically-inspired women's collection.

Surprising her fans, Gigi announced that she would be flying out to debut her highly anticipated collection at Berlin’s annual fashion festival; Bread & Butter, so marking Ubiquitous’ first international PR job, 2 branded taxis made the drive from London to Berlin to celebrate the Partnership.  Proudly emblazoned with the hash tag #TOMMYXGIGI, the taxis were used for a variety of promotional work during their stay in Germany.

The taxis began their international venture by showcasing at fashionable Soho House, whilst bloggers attended an exclusive clothing fitting. Once their fitting was wrapped up, the bloggers were transported (along with their shopping bags), by the iconing branded taxis, excitedly sharing their experience on their blogs and social media pages.

The bloggers were also transported to the official launch date of TOMMYXGIGI at Bread & Butter and much to the delight of Gigi’s fans, the taxis parked up outside the Berlin Arena in between transportation duties; this allowed guests to have their photograph taken next to a taxi prior to seeing Gigi and her collection.

Completing their trip in Germany, the drivers were given the special task of looking after Gigi's family on their final day. Flown over from the Netherlands by event hosts Zalando, Gigi’s family were able to site-see in true VIP style in two TOMMYXGIGI taxis. Taken to all of the famous landmarks including Check Point Charlie and The Brandenberg Gate, the taxis also made a special stop at the Tommy Hilfiger Store.

Providing the perfect photo opportunity, Gigi’s Aunt featured a family photograph on Instagram. The taxis were so well received, that Gigi’s family requested that they take them onto the airport at the end of their trip! 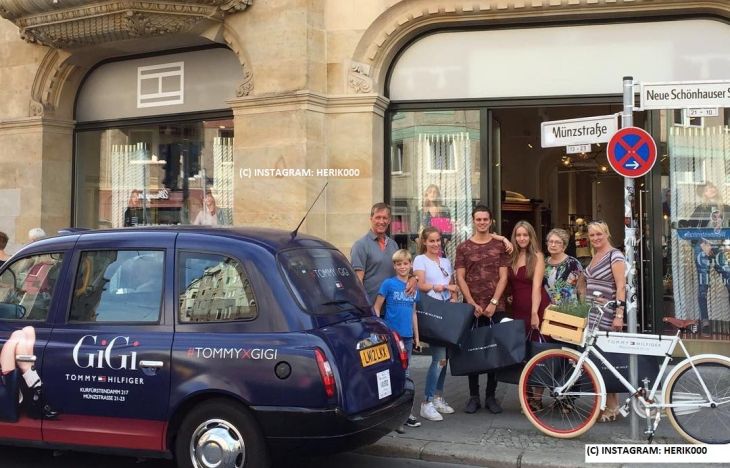