UK asset manager Jupiter, has been an advocate of taxi advertising for several years; the iconic OOH taxi format is a solid foundation to Jupiter’s integrated customer marketing plan, which includes an intelligent mix of above the line media.

If you’re a commuting businessperson you’re very likely to have seen Jupiter’s advertising; their media plan is focused on reaching a well-defined target audience that includes Financial Advisers and wealth managers, as well as the all-important end investor, for whom the brand should be recognisable and trusted. Their plan is delivered via a blend of targeted online and press, and both digital and classic OOH media. You’ll see Jupiter at rail stations, airports and at roadside, where they’re using digital OOH for flexibility and location and classic billboards for audience reach. OOH is complemented by media placements in broadsheets and financial/business titles.

Uniquely within this on/off media mix, the taxi advertising runs throughout and across the long term, delivering constant brand exposure to Jupiter’s target audiences in a typically British manner. But why choose taxis, a unique and very classic form of advertising, for long-term brand building?

Looking beyond the obvious ‘Britishness’ of black taxis, perhaps the most important factor is the efficiency of taxi advertising to provide Jupiter great reach and frequency to their target audience, as black cabs visit those city centre streets where they know the audience exists. Not only is this cost-efficient media buying, but it puts Jupiter’s brand in city areas where there is little competing media and does so in a manner that is both disruptive and active. When asked about this, Jupiter’s Head of Marketing commented that ‘Jupiter has long incorporated taxi advertising into its media plan and we choose to do so because taxis place our brand into those areas where we know our target audience to be.”

Coming a close second to audience reach is the very fact that the taxi campaign is ‘always on’. In this age of immediate return, brands will often favour short bursts of activity that can quickly be held accountable; but whilst this tried and tested tactic drives response, it doesn’t build familiarity and trust in the way that enduring brand advertising does. Across the long term, the type of campaign that Jupiter is running on taxis delivers outstanding cost efficiency and audience reach, so perhaps it’s not surprising that they have chosen taxi advertising as the ‘always on’ brand message carrier.

And what clever messages they are too! With their bright orange wrapped taxis, Jupiter boldly promotes its very personal and expert service in a clever and contextually relevant way. Their latest campaign, ‘Direction’ plays on the idea that London’s cabbies know their way around town better than anyone, like Jupiter and the financial markets, with the clear explanation that ‘Some know their way around the markets better than others’. ‘Direction’ is hot on the tails of the previous campaign, ‘Driven by Humans’ – a timely message, in the era of driverless cars, that Jupiter uses ‘people not algorithms to navigate the markets’.

Jupiter has a history of using their taxis to deliver intelligent copy that’s contextually relevant; in this way they’re talking directly to their target audience: those investors who value the type of clever thinking that stands out from the crowd. The taxis, quirky, British and full of personality (figuratively and literally), allow Jupiter to have a little fun with their brand, or as Laura Curtis would put it, ‘it’s a space in which we can be both playful and intelligent with our message, allowing us to appeal to our audience in a thoughtful, human manner.’

Besides the obvious media planning efficiencies, it’s fair to say that Jupiter favour their striking orange cabs because they are uniquely adding flavour to the brand. They’ve taken ownership of this global icon with their vibrant orange and they’ve hit a tone of voice that has delivered brand recognition and fame – something that only comes from backing your brand with conviction and consistency over the long term.

Jupiter's OOH media is planned by Ptarmigan and booked by Talon Outdoor. 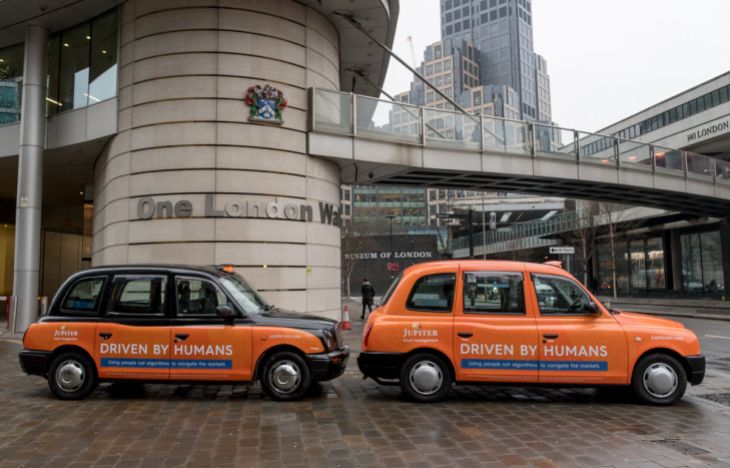 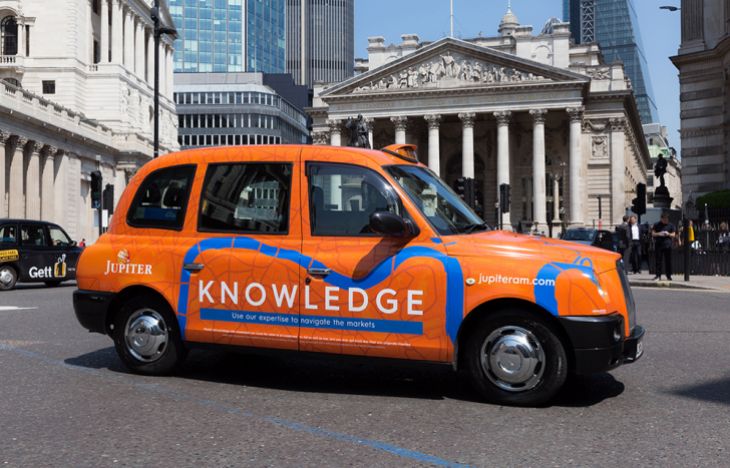