Opening their largest store in the World, Lego’s new home in Leicester Square was un-boxed in style on stroke of 12pm on 17th November and officially opened by London Mayor, Sadiq Khan.

The taxis were used for official opening event photography and shared on social media to tease the public prior to the opening, and on the big day, to draw attention on the opening, two of the vibrant taxis were booked to showcase within the vicinity of the store for the press call. Additionally, the taxis had the important job of transporting VIPs to the store in time for the grand reveal, ensuring they arrived on time and in Lego style.

Attracting large crowds, eager fans were keen to be the first customers inside and couldn't believe their eyes when the store was revealed to include unique large Lego structures including Big Ben and a London Tube train; and not a brand to miss a trick, Lego couldn't resist including their branded taxis within their celebrations too.

The London public and overseas tourists were thrilled to see an iconic brand on an iconic vehicle - this fun and creative taxi advertising campaign also generated social media interaction through the hash tag #LegoStoreLondon, which saw users uploading photographs of the taxis they spotted. 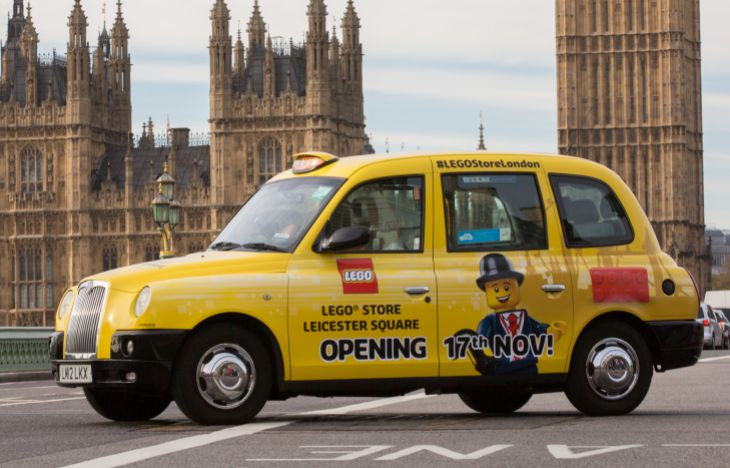