Leading global banking, payments, and shopping service Klarna returned to taxi advertising this spring as part of a wider strategy of OOH, online, social media and print activity, to create broadcast-level noise for their #WhyPayInterest campaign; planned and booked by Bountiful Cow and Kinetic.

Klarna is no stranger to taxi advertising, having used the opportunity numerous times to generate broadcast-level brand awareness to a retail street audience; but on this occasion the brand harnessed the potential of taxis to create heightened message awareness during key moments.

“Klarna branded taxis have played an important role in the ‘Why Pay Interest?’ campaign,” Klarna Marketing Manager Mark Godfrey explains. “From delivering three separate messages at once, to targeting key locations and landmarks, as well as featuring heavily in our PR releases and activity.”

First let’s take a look at the messages - the alternating creatives included surprising financial statistics highlighting the benefits of using Klarna over the traditional credit card model. For example, in 2020 alone, Brits lost over £5.7 billion to credit card interest – that’s £144 every 60 seconds. Meanwhile, those that used zero-cost buy now pay later options saved £76 million in interest payments. Thought-provoking stuff and actually quite an unusual execution for taxi advertising – we don’t usually see copy-led creative on taxis, as many brands feel the opportunity doesn’t lend itself.

Of course, we beg to differ there – the high frequency offered by taxi advertising makes it the perfect roadside communication platform for multiple messages. A campaign such as Klarna’s, with 400 taxis, will be seen on average twice a week by Londoners; in fact for those in the city centre where taxis spend most of their time, real-life campaign visibility will be a lot higher.

Godfrey continues, “As Britain starts opening up again, we wanted a presence on the street and taxis represent one of the safest ways of getting moving again, helping us see our loved ones and taking us to venues and events around the capital once more.”

This powerful campaign, which will reach 7/10 Londoners, comes at a time when there is growing pressure from the Government for regulation of the UK’s booming buy now pay later industry; #WhyPayInterest shines a spotlight on challenging what CEO Sebastian Siemiatkowski suggests is an outdated business model. It’s important for online shoppers be aware that Klarna is on the front-foot in this debate, so to create targeted message amplification, Klarna asked the PR Events team at Ubiquitous to arrange a number of bespoke taxi activities.

Convoys of branded taxis are highly effective at turning heads - to draw the attention of pedestrians in Piccadilly, three Klarna taxis continually circled Piccadilly Lights, on which Klarna’s campaign was also featured. A similar tactic was employed to heighten awareness of the Klarna projection on London’s iconic County Hall.

In addition to convoys, Klarna users were offered free taxi rides from Shoreditch’s Ebor Street, where a branded Klarna ice cream truck was set up in front of an interactive mural – what a great way to create an on-street impact for this important message, and combine it with bags of feel-good factor.

High-five Klarna! This taxi campaign is a shining example of how to deliver a broadcast-level OOH reach and frequency that also has a real-life, street-level impact, exactly where and when you want it. 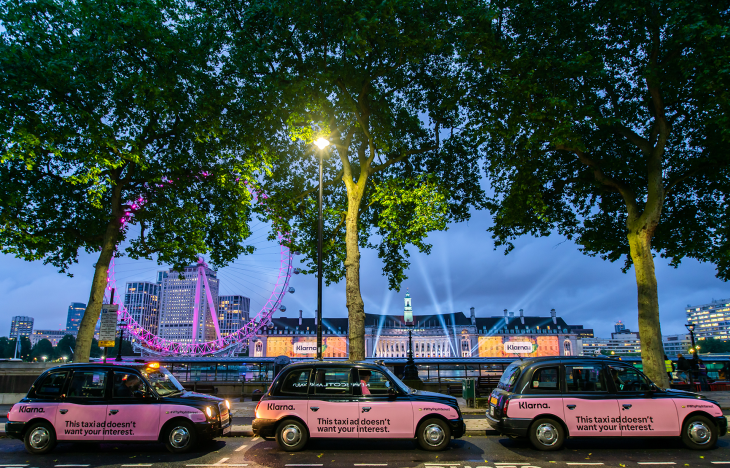 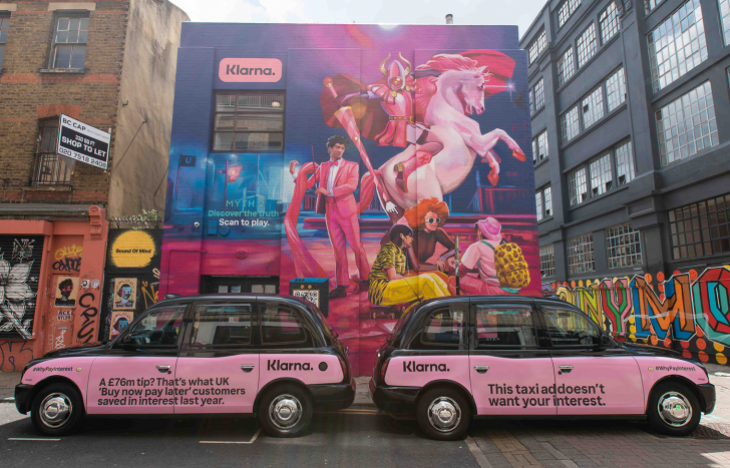