Bulb partnered with taxi-advertising company, Ubiquitous, to sign the cab drivers up to Bulb. At home, the cabs are charged with 100% renewable electricity sourced from wind, solar and hydro generators in the UK.

By choosing renewable energy, Bulb’s 1.4 million members have collectively lowered their carbon impact by 4.9 million tonnes of carbon per year. The company, whose mission is to help people lower their energy bills and cut carbon emissions, see Electric Vehicles (EVs) as another important step towards net zero emissions. The brightly-coloured fleet will drive around 620,000 emissions-free miles in London every year, contributing to cleaner air in the capital.

Earlier this year, Bulb partnered with EO Charging and Suffolk County Council to launch the country’s first “fully open” charging network. Up to 400 individual charge points across 100 locations and businesses in Suffolk will be installed under the scheme once complete. In February, Bulb also announced a partnership with smart device manufacturer, EDMI, to trial technology to control EV charging automatically, helping to balance the grid.

Jenny Zhao, Head of Growth at Bulb, said: “At Bulb, we’re on a mission to help people save on their bills and reduce their emissions. We hope these cabs will get more people thinking about where they get their energy from. Switching to a renewable energy supplier is a quick and easy way to make a positive impact on the planet – we hope the cabs will encourage lots of people to do just that.”

Steve O’Neill, a London taxi driver for 25 years, said: “I’ve got two small grandchildren so for me, when I think about the long term future of the air, I’m thinking about them. If I can make one small help towards making the air a little bit better then great, I’ll do it.” 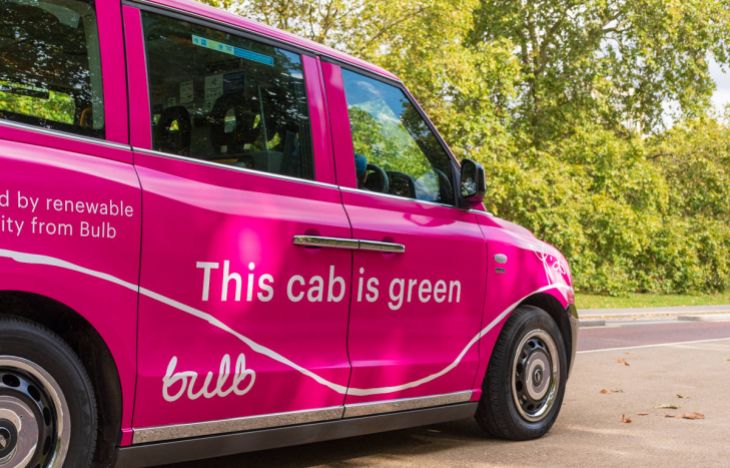