Air Europa, the award-winning Latin American specialist, is marking the launch of its new route between capital cities London and Montevideo by running a taxi advertising campaign.

A total of 75 Air Europa branded taxis take to the streets of London promoting Uruguay as one of Latin America’s fastest growing destinations, to UK leisure and business travellers. The airline aims to raise awareness of its great value for money and high quality service by teaming up with Ubiquitous for this taxi advertising campaign and creating a striking advertising campaign for Londoners that promotes highly competitive prices, generous baggage allowance and quick connection times.

Uruguay’s beauty is captured on the side of the taxis and on tip seats, while branded receipts mean that passengers are left with additional reminders about the campaign after their journey. Benjamin Liberoff, National Director of Tourism of Uruguay, stated that “the three weekly flights between Euope and Urugay are a challenge and opportunity to increase tourism and business between our country and Europe. These past weeks have reaffirmed this development and we trust that the flights will also further serve to unite Uruguay with Asia”.

Colin Stewart, UK General Manager for Air Europa, adds, “Uruguay boasts the highest quality of life in Latin America, and is home to such treasures as elegant Montevideo and the luxurious coastal resorts of Punta del Este and Jose Ignacio. This new route from Gatwick to Montevideo secures us an important role as the airline of choice for Londoners travelling to Latin America. Working with the highly experienced team from Ubiquitous helps us to spread this exciting news”. 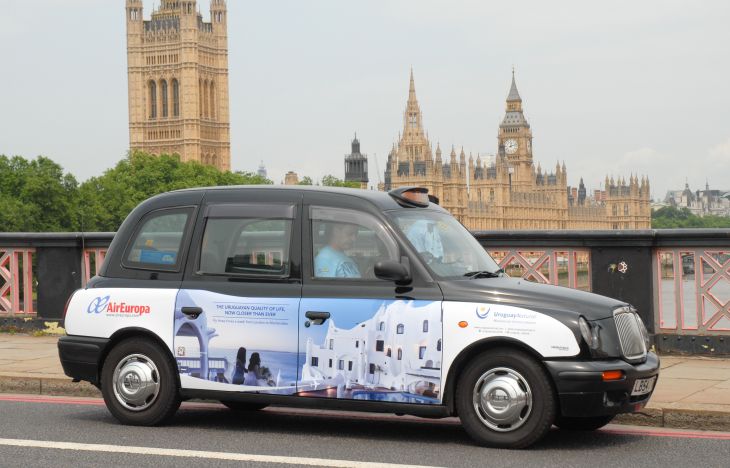