75 Reasons to support our D-Day veterans

Those who know Ubiquitous well, will likely be aware that we support The Taxi Charity for Military Veterans; an organisation that is powered by London’s cabbies and works for the benefit of military veterans young and old.

This will be another busy year for the Taxi Charity, not least because 2019 marks the 75th anniversary of the D-Day Landings and some of the Taxi Charity’s veterans played an active role in the events of Operation Overlord and the landings at Normandy’s beaches.

The D-Day survivors are approaching 100 years old, so now is the time for the Nation to thank them for their dedicated service. The Normandy Veterans’ Charity has proposed a perfect way to celebrate the D-Day veterans who live amongst us, whilst also commemorating those who gave their lives: a commemorative garden at the The Royal Hospital Chelsea, during this year’s Chelsea Flower Show.

The ‘D-Day 75 Garden' will celebrate the lives of our Normandy veterans; 75 of whom will be invited to take part across the week and share their incredible stories with the Chelsea pensioners and the public. It will then be gifted by the veterans to a permanent site in Normandy, where they will unveil it on 6th June 2019.

I’m sure you’re reading this and you’re thinking, ‘what an excellent idea’; however, the garden needs your help! It will cost £250,000 to create a sustainable garden of this size (32mx12m). The ‘D-Day 75 Garden’ will receive a great deal of attention during the Chelsea Flower Show, with its global audience of 2.1 billion. However, money is needed now to create this national tribute to our Veterans and deliver it in time for the Show.

Yes, this is a blatant fund-raising appeal! D-Day Revisited has launched ’75 Reasons to Thank Our Normandy Veterans’ - a campaign dedicated to raising the required £250,000 and has already secured approaching £50,000, but with just four months to go time is pressing. Victoria Phipps, Secretary of D-Day Revisited has publicly stated that she hopes “The general public, businesses and the Government will come together to support the veterans, on what will be the final opportunity to do so with any significant number of men and women who experienced D-Day first hand.”

Ultimately of course, D-Day Revisited would love for a headline sponsor to embrace this opportunity and benefit both from the significant media coverage and the positive associations that will ensue in consumers’ minds. But there’re more than one way to skin this cat! The Charity is asking 75 individuals or companies to support the garden with a minimum donation of £2000; a modest investment to enable RHS multi-gold winning garden designer, John Everiss, to create this fitting thank you to those who gave their tomorrow for our today.

Thanks to support from business people and celebrities such as Stephen Fry, Piers Morgan and Amanda Holden, the project is gaining interest across social media.

Text “DDAY” to 70500 to donate £2 or visit the crowdfunding page to make a larger donation.

To become one of the 75 business supporting our Normandy veterans through this project email D-Day Revisited Secretary Victoria Phipps directly: [email protected] 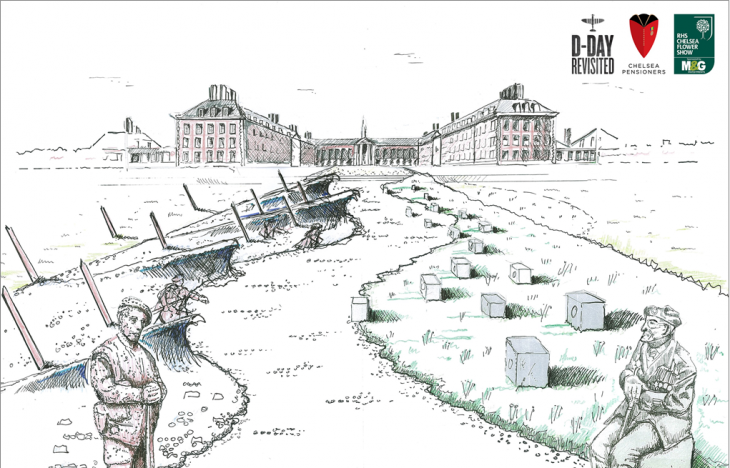