HAVAIANAS teamed up with Ubiquitous to bring a taste of Brazil to London. With 15 liveries and 80 supersides the colourful taxis were complimented with both matching Tip Seats and Receipts. However, 3 of the Livery taxis were given a unique makeover to celebrating both the Summer Solstice and International Flip Flop Day. Giant flip-flops were affixed to the roof of the taxis, and they were used to showcase at key London locations including The London Eye and Selfridges. One of the taxis was positioned at the HAVAIANAS Canary Street Store for an entire day and was joined by promotional team members with inflatable flip flops, they then encouraged the public to have their photographs taken with the taxi and share on social media.

On the second day of the activity, the 3 special build HAVAIANAS taxis stirred up excitement by performing a convoy across London. Driving together along a set route, the taxis targeted both shopping areas and tourist attractions including Oxford Street, Regent Street, Marble Arch and Hyde Park. The convoy allowed HAVAIANAS to showcase it’s unique taxis to curious passers-by, and prompted them to join in with their own photographs sharing their own flip-flop taxi experience on social media. Generating even more excitement about HAVAIANAS and the arriving summer, the taxis became an instant hit; alongside the hashtag #TaxiToSummer. 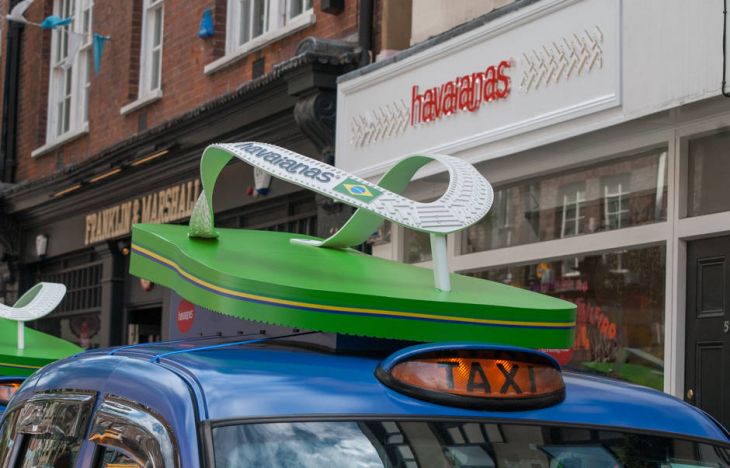